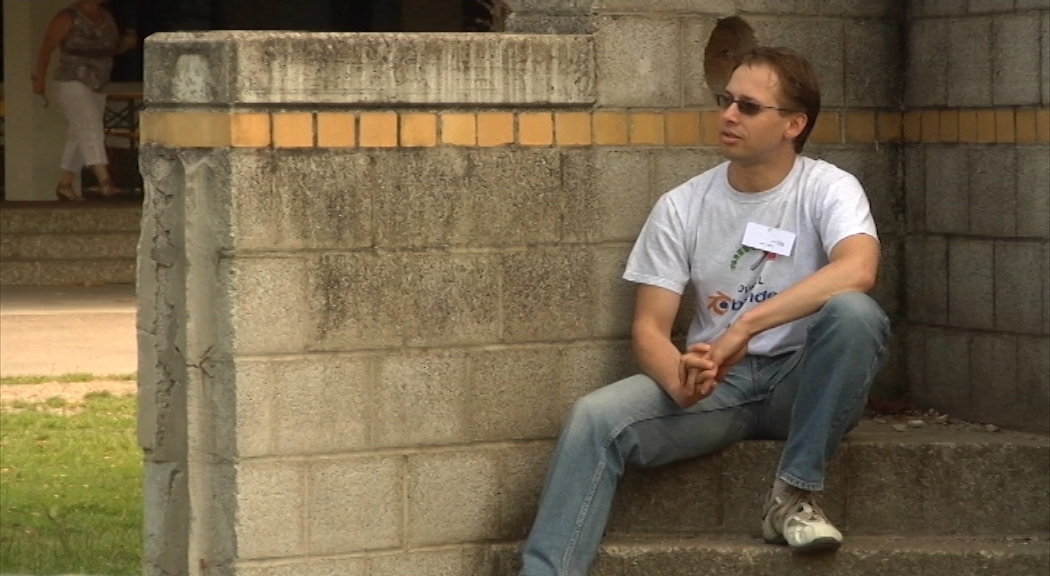 At the moment, Jeroen Bakker ist doing a big overhaul of the Blender compositor to create a better user experience and adapt it to modern hardware. BlenderDiplom had the pleasure to interview him about the project and his experiences with crowdfunding!

I'm a Blender developer and I'm working on the compositor right now. The compositor is a system where you can tweak your rendered image to get final production-like/Hollywood-like images. That's a system that has been built years ago and did not evolve. That's the project I'm currently doing. I asked for money from the community for the project and a lot of money was coming from Germany. That's why I'm here at BlenderDay 2011.

Maybe you can give us some details about the philosophy behind the rearrangement of the compositor and what you want to achieve with the revamped system.

People are always complaining about the speed of the compositor. That's one part of the system I want to change. But I don't want to make a really fast compositor, I want to create a compositor that works faster for you. People don't have to wait until the compositor is finished, they see the results while the image is created. This way they can directly interact with the system.

You talked about people donating. How does it work, how did you set it up and were your expectations met?

The project has been started at the beginning of the year, it's just six months old. I needed some money to get this project started. It takes a long time to change the compositor and I cannot do that anymore in my spare time. My first idea was to get a crowdfunding campaign because Blender has a large, active community with many dedicated people who use the compositor. Every movie uses the compositor, every artist uses it to finalize the image. So I thought if everyone gives 5 Euros to me I could create a better compositor for them - that's a winning deal.

How was the raise like? People donating, people complaining?

To my knowledge this is the second crowdfunding project to the code of Blender. The first one was to free the code of Blender and this one is the first big project. There were a lot of things uncertain when we started the project. Are people going to donate? How much are they going to donate? That's a big risk. If you start with the project and people have donated they want you to finish. Even for small amounts of money people want to see something. What I did to minimize the risk was to create seperate phases for the project. For every phase I took 50% of risk just to see what is going to happen. The first phase was to get direct response between the system and the user. In one month of time I got all the money I needed to finish that phase. That was a success. I did not expect it, it just happenend. And that is thanks to the Blender community.

At the moment you're in phase #2 but the raise is not finished yet as I have seen on your website (*).

Yes that's true. Phase number two is to support modern hardware. To get faster calculations to utilize all possible CPUs, GPUs and memory you have on your system. That phase is not yet fully funded but I think it will be finished in a few months.

Phase #3 will be about the actual nodes in OpenCL?

The project is about how a compositor uses the system and whether or not the current system blocks the user in his workflow. Many nodes we have right now have been developed because they where needed at some time to get something done. I think that most nodes need to be reviewed to see what is the ideal set of nodes where a compositor can do most of the work. That is the third phase and I think most of the time consuming tasks are there, in phase three.

You're very open about your developments. You keep a blog with weekly reports of what has been done and what's left to do. You create YouTube videos about your progress on a regular basis. How important is that for a crowdfunding project and does it build trust in your future endeavors?

Are you also cooperating with studios to fund development and get input?

I had an idea when this was started that perhaps a studio could sponsor this project. But mainly the smaller studios are donating a small amount to get this finished but there is no big studio sponsoring.

So it's a pure community project?

Thank you for the insights into your project!

(*) Thanks to some great new donations the project has already entered phase 3!