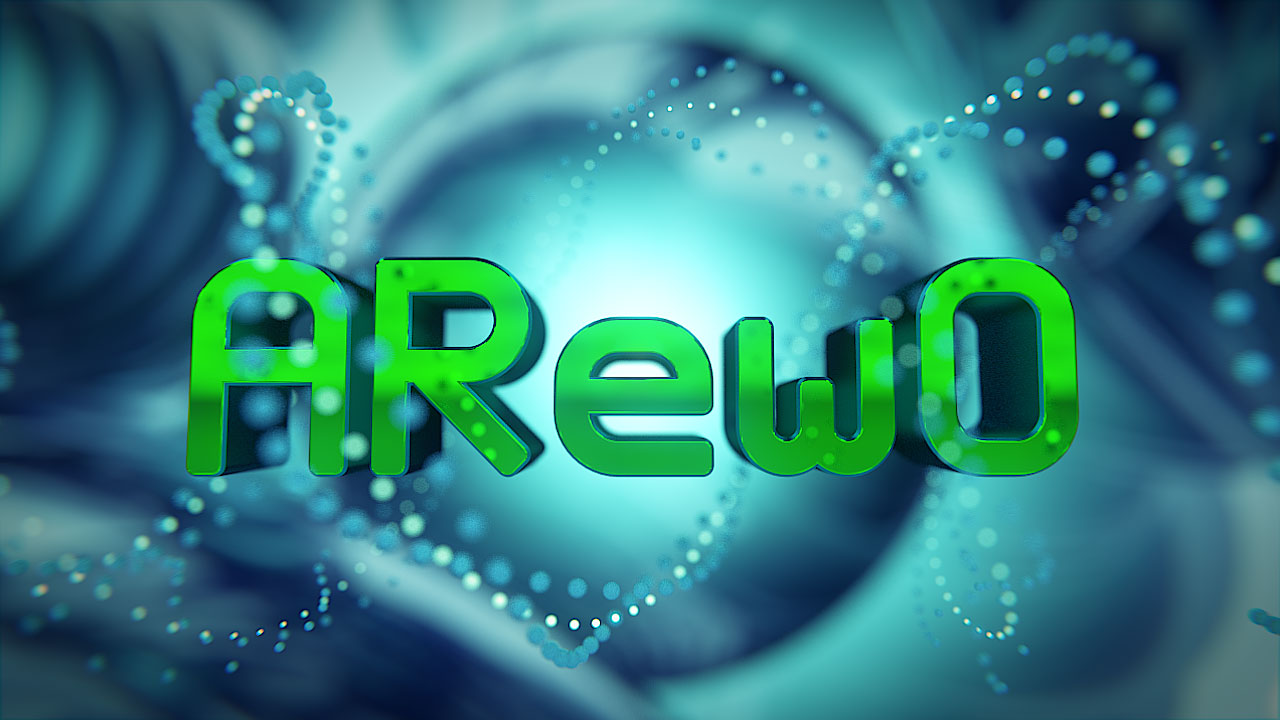 ARewO stands for "Animation Replicator with Offset" and is a nice little tool for motion graphics-style animations. It's like an array modifier supporting per-object animations and even armatures! Additionally, you can have great control over where the copies will be placed (e.g. along a path) and even offset their animation. 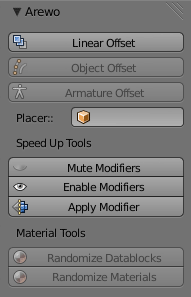 You can download it here. (Right Click -> Save As). Save the arewo.py file on your disk, then start Blender and click on File -> User Preferences (CRTL + ALT + U). Click on the Addons tab and choose install from file. Select the arewo.py from your download location. Then go to the animation section of the Addons tab and check ARewO to enable it. Alternatively, you can type arewo in the search field and enable it from there.

Once you have activated the ARewO Add-on, its buttons will appear in the Toolshelf (T-Menu). The first 3 buttons will produce replicas of your object, let's have a look at them first. Once you have an active object, you will be able to use ARewO, for Linear and Object Offset, this object is the Master Object, which will be replicated. For Advanced Offset, the Armature in your selection will be the Master Object, with however many children. If there is only one object selected, the Advanced will act just like the Object Offset, except it will carry modifiers.

Here are a few things you should (but not must) do before using ARewO to avoid unexpected results: 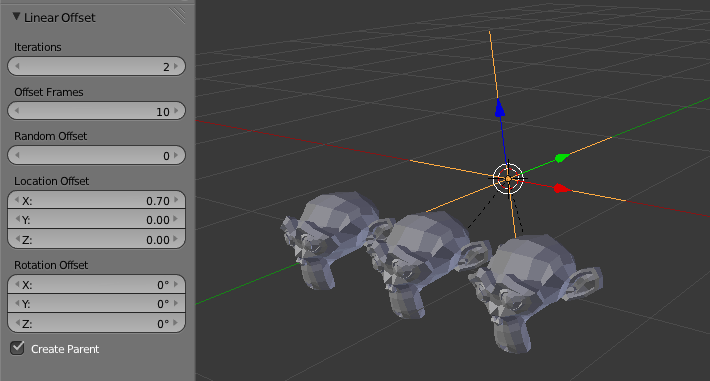 Fig. 1) The "Create Parent" Option will place an Empty in the middle of your scene which will be the parent of all replicates.

If you select an object and press this button, you will get a bunch of options, here is the explanation:

The Object Offset is a lot more versatile in its offset options, even though it appears to have fewer settings.

You will have to specify a placer object in the panel in order for this to work. The placer will need to be animated, as it is used to distribute your copies. Let's take the most simple example: You're at frame 1, your placer is at (0,0,0) and it has another keyframe at frame 11, where its X-Location will be 10, if the interpolation is set to linear, in each frame your placer will be 1 BU right of its last position. If you choose another object now and run Object Offset, your copies will be spaced 1 BU apart starting at (0,0,0) and so on. But the fun does not stop there. You can go nuts animating the placer. You can use a Path, an animation or even some physics simulations to distribute your objects in space. Just scrub through the timeline and check where your object is in each frame to get an idea of what your result will look like.

Once you animated your placer, click Object Offset, and you will see the following options:

Note: Object Offset does not support modifiers, if your master object has any, they will be ignored on the copies, if you want to carry modifiers, use the Armature Offset (or the Apply Modifier in the Speed Up Tools. See below):

The advanced offset does basically the same thing as the Object Offset, but is more flexible. This is why it comes with the same options.
It is also slower which is why it's a separate button, here are the differences:

Here are some important notes on how ARewO works internally:

After running ARewO, you will still be able to scrub through the timeline to check your animation offset, without losing the ability to alter your options.

The Location / Rotation Offset in Linear mode will alter the delta transformations of the copies. This has the great advantage that they will be independent of any existing keyframes for those properties. It is something to keep in mind, though, in case you do want to alter or keyframe them.
The same goes for the Inherit Rotation / Inherit Scale option.
Unfortunately, you cannot use location keyframes with the object / armature offset, due to the nature of the location method. Your objects will be placed in space, and jump back to their location determined by your keyframe once you change frames. There are 2 workarounds for this.

The Add-on will create linked copies of all your objects. This has several advantages: If you want to make changes to your original, you can do it in edit mode, and it will be transferred to all the copies. They all share the same material, so it's easy to carry out changes after running in the mode of your choice. If you need to edit them separately, you can select them all, and press U -> "Object & Data". Because shapekeys are linked to the datablock of an object, not its animation, ARewO cannot work with Shapekeys. If you change the shapekey animation of an object, the changes will be transferred to all objects sharing its datablock.

If you select 0 time offset frames for your animation, but 50 frames for random offset, some of your copies will animate before frame 1. You can select them all, go to the Graph editor, select all channels using A and then press G -> X to move them in time, until there is no more keyframe before frame 1.

You don't have to use the Add-on for animations only. It is also a quick way to position objects along a path, here is how:

Fig 2.) The outline of the replicates resembles the curve of the Z-Scale of the NewPlacer object.

You can use the "Inherit" options to randomize the scale (or rotation):

Alternatively, you can actually gain great control of the overall look of your objects by animating the placer's scale manually. See how the shape of the "Trail" matches the Z-scale curve of the placer object in Fig. 2.

Last but not least: The Speed Up Tools:

Those four buttons are helpers, that you can feel free to also use without ARewO. Mute Modifiers will mute all modifiers on all selected objects, with the exception of the armature modifier. This can greatly increase the speed of the Armature Offset, but you will still be able to see your animation, because the armature modifier is still visible. If you want to see all your modifiers again, click Enable Modifiers. This goes for viewport visibility only, it does not effect the render settings.
The Apply Modifier button works a little differently than the one in the Modifier Stack. It will apply the first modifier of the active object and pass the changes on to all objects sharing the same datablock. This is especially handy since just linking the modifiers will destroy the instances in render. Cycles can't know you want them to be instances if they differ in their geometry which will be the case if they have a modifier attached.
If you use this operator, you will have two options:

Not a speed up tool, but still handy:
Randomize Datablocks: With this button you can assign a bunch of objects random materials. You need at least 2 objects selected in order for this to work. Assign all materials you want to be distributed over your objects to the active one. Then press Randomize Datablocks, and all selected objects will randomly get one of these materials assigned.

NOTE: This button is to be used with objects sharing the same, or at least very similar datablocks as the active one, since it creates instances. If - for example - you have a cube active and additionally a sphere selected, the sphere will become a cube with a random material.

Randomize Materials: This button is actually not supposed to be used with ARewO Replicates, because it destroys instances. Only use this if you want to assign random materials to different objects. This will destroy any instances and increases render times.

NOTE: Both randomizing buttons will remove all but one material from your objects, thus objects requiring more than one material to work are not suited for this method. Also it might be a good idea not to include the original object, if you want to redistribute the materials later on - saves you the hustle of assigning all those materials to one object again.